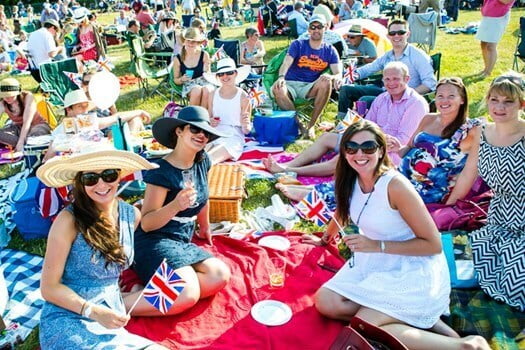 2017 sees the 20th anniversary of the Battle Proms; the first event being held at Battle Abbey, East Sussex in 1997.

From this it has now grown into the UK’s premier picnic concert series, set at the UK’s finest stately homes; including Ragley Hall, Warwickshire.

The concert takes place by the lake, creating dramatic and breathtaking pyrotechnic effects with the cannon fire and fireworks for which the Battle Proms have become famous.

The creation of the Battle Proms came from a desire to make best use of the 200 live firing replica Napoleonic cannon that were taking up a lot of room in the yards of the English Field Artillery Company.

The only sensible use for this amount of guns was to perform Beethoven’s ‘Battle Symphony’* as he intended, with 193 live firing cannon providing a thunderous percussion!

It is this signature piece which gives the Battle Proms its name and lends a unique and spectacular twist to all Battle Proms concerts.

The cannons also feature in the 1812 Overture (a mere first half finale at the Battle Proms!) and provide a stunning backdrop to our panoramic concerts.

Over the years the Battle Proms team has worked hard to ensure that they provide the most truly memorable Proms in the Park style events set in the most spectacular locations.

The result is a picnic concert series that has a loyal following of regular ‘Battle Promenaders’.

It features not only an uplifting orchestral programme of sublime classical music, but additional acts and attractions to ensure a jam packed summers afternoon and evening for all.

Above all for further information please contact the event organiser using the details shown below.

Finally check out our self catering holiday cottages